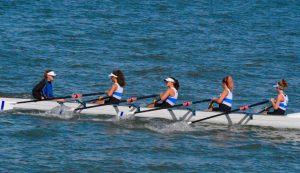 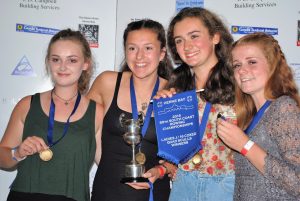 Shoreham Rowing Club has rounded off a hugely successful 2016 season by winning the Ladies Under-16 quadruple sculls race at the South Coast Championships, held on Saturday 3rd September in Herne Bay, Kent.

The four Shoreham girls, Verity Millar-Sarahs, Phoebe Mercer, Portia Smith and Delphi Coombes-Cowell coxed by Ezra Hulme, led their race from the start, maintaining their power and composure to see off challenges from six other clubs from across the south coast. Undefeated in the quad for two years running in Kent and Sussex, their victory on the larger South Coast stage was very well-deserved.

Shoreham Rowing Club vice-captain Sarah Faith says “Our J16 girls have worked so hard this year, racing multiple events at each regatta, dedicating themselves to their training and proving that they will be key members of Shoreham Rowing Club for years to come. They should be very proud of their achievements this year – we all are – they continue to inspire their peers to succeed and I have no doubt that we will see them winning again at South Coast Championships in the future”.