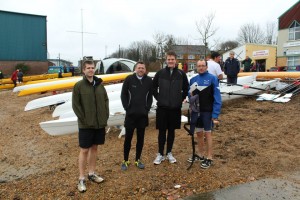 Blistering head winds seem to be the order of the day for this year’s head races with Southampton outdoing the Adur by adding driving rain and waves into the mix. It made for some interesting racing conditions and a baptism for fire for the Shoreham novice crews more used to the gentle swell of the harbour.

Battling the 4.5 mile course first were the men’s crews, and for Shoreham the Junior Men’s four of James, Dan, Mark & Mal. The boys rowed beautifully through the middle section, but admittedly they did lose a few precious seconds at the end of the course by taking the more original approach of stopping before the finish line, rather than after it.

Next to brave the waves were the novice four of Adam, Matt, Ben & Simon – a long race in tricky conditions for a newly formed crew but a great experience which should stand them in good stead for the upcoming season.

The second division saw the headwind, waves and rain all pick up to welcome the vet’s and ladies’ races. Lovely. Thanks.

The vet four of Jim, Tim, Ron and Richard were, however, undaunted.  The first Shoreham crew to head off, they rowed well to overtake Lymington and win their category. Well done boys!

The senior ladies four of Sarah B, Sarah P, Gemma & Sally had a solid race to come second to a strong Ryde crew, and were significantly quicker than the next senior ladies down the course. Unfortunately they remained defeated by the Shoreham vets (we’ll get you next time…). 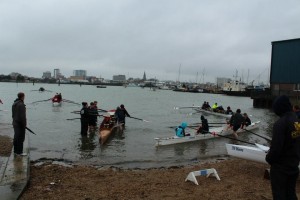 The novice ladies, Charlotte, Pigg, Rocky & Harriet had a cracking race, finishing a very respectable 11th out of 29 crews despite never having ventured off the Adur and into rough conditions before. Apparently with a limited idea of what to do when faced with the waves the girls chose to laugh through it. Ladies, we like your style.

Particular thanks go to the day’s 3 brave coxswains. Becky’s contact lens-less (the rain washed them out) calls of ‘I cant see’ spurred the senior ladies home, Ezra had the dubious pleasure of leading the field down the course in the second division (with no idea where to go being told earlier to “just follow the other boats” was clearly not useful advice in this case) and Rachel soldiered through a particularly cold first ever race as a cox. Thanks girls – you all did a fabulous job.

Thanks also to Southampton RC for the hospitality, tea and cake…we’ll definitely be back next year (but please have a word with the weather first)!