Shoreham Rowing Club travelled down to the West Country last week to compete at the prestigious 2013 Port of Dartmouth Royal Regatta. And negotiating the windy Devon lanes with a trailer-full of boats was well worth it, as Shoreham returned home with some fabulous wins at one of our favourite events of the year. 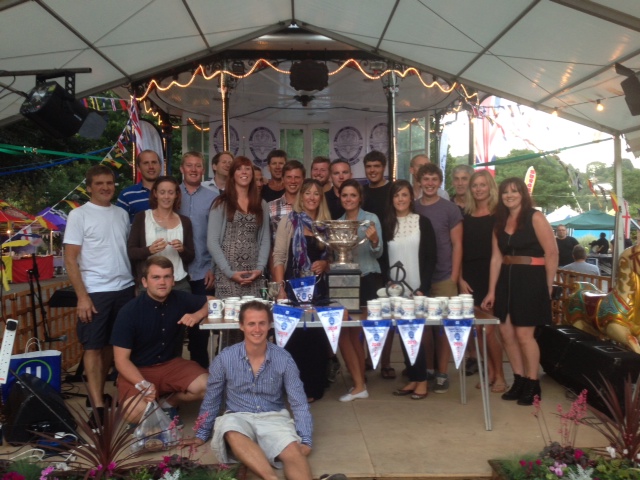 Flying the flag for Sussex and Kent’s Coastal Amateur Rowing Association in Dartmouth were both Shoreham Rowing Club and Bexhill Rowing Club and the clubs teamed up for the first race of the day, the Mixed Open Eights. Dartmouth Rowing Club held them off the start but despite never having rowed together (and for some a first-ever outing in an eight) the Shoreham-Bexhill crew pulled through every stroke to win by a length at the end of the 2000m course.

Shoreham’s Mixed Senior A Four of Tom Faith, Adam Page, Sally Hills and Sarah Bareham were next down the course. With Dartmouth’s crew snapping a blade at the start the four had an easy race against a touring Melbourne veteran crew, and rowed steadily home to a convincing victory.

With only two weeks until the 2013 South Coast Championships, racing at Dartmouth was going to be a nerve-wracking test against the top female senior crews in the South West for Shoreham’s Senior Ladies Four of Sally Hills, Gemma Stoner, Sarah Povey and Sarah Bareham. However girls rose to the occasion and rowed well to lead Dart Totnes down the 1000m course and take the win.

The Shoreham veteran men’s crew faced one of the toughest competitions of the day, with entry numbers meaning they had to race a heat to qualify for the final. The crew of Tim Bailey, Jim Dixon, Ron Tully and Richard Barry rowed well in both, finally taking third place, but couldn’t quite catch fellow Sussex crew Ardingly who took home the trophy.

Shoreham also had a successful day the sculling races, despite wash from Dartmouth’s copious ferries, paddle steamers and water taxis making life difficult in the small boats. Adam Page and Tom Faith rowed well to finish a solid second in the Senior A and Senior C single sculls respectively. Sarah Bareham braved the waves for her first ever race in a single scull and through gritted teeth held on to win the Novice Ladies event over Dart Totnes.

The final race of the day – the Men’s Open Eights was always going to be a fast affair. With Oxford Brookes University fielding crews including GB athletes; the winners were perhaps inevitable, but teaming up again with Bexhill Rowing Club, Shoreham performed well and enjoyed their chance to row in a fast, exciting Eights race.

Up against crews who regularly race in the narrower, more technical fine boats, coastal rowing club Shoreham held their own, flying the flag for Sussex and taking home a total of 4 wins, 2 seconds and 1 third place.